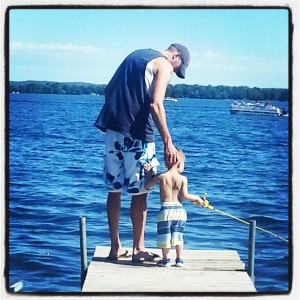 Since I didn’t blog last week, happy belated Father’s Day everyone! We finally had a beautiful summer weekend at the lake! Above is a picture of Quinn and Jared fishing for the first time. I learned a couple things about Q this weekend: 1. The kid has zero fear of anything. Jared put the fish on the dock and he immediately picked it up. The water was FREEZING and he walked in like it was his job,  bent at the waist and submerged his entire upper body into the ice bucket that is Big Detroit Lake. He did say, “Done now” as soon as he realized what a bad decision that probably was. 2. It’s virtually impossible to get him inside. Even after he’s been outside from 8am to 7pm.

So the title of this weeks blog has to do with yesterday. I had one of those, “I have zero patience and the sound of your voice is driving me up the wall and back down again” kind of days. Quinn has been on a mommy kick again. Although he’s not as dependent as round 1, he’s having mini meltdowns if mommy doesn’t do things for him as opposed to daddy, grandma and grandpa, etc. My mother always says, “This too shall pass”. Yesterday I thought, “I’d appreciate if this would pass a little faster.”

Q is gaining major independence. It doesn’t matter what it is. The answer to everything is “NO! I DO IT!” or “QUINN DO IT”. Long gone are the days of Mr. Tender-Heart. He’s becoming all boy. I can’t even explain the exact changes but you can literally see it in his eyes. He even got his first time-out last week for chucking a toy cell phone at another child at daycare (proud parent moment I tell you what….). He’s naughty. Plain and simple. I know it’s normal but it’s extremely frustrating. And he’s smart. He knows how to manipulate Jared and I and push our buttons already. He knows what the word “No” means and chooses to ignore it when it comes from us, but listens to his daycare provider or anyone else for that matter when they say it to him.

When I was having a mommy breakdown yesterday talking to my own mother, I told her that sometimes I forget he’s only 2. I feel like it’s because he’s abnormally tall and in my opinion, older “looking” than some 2 year olds. He talks like he’s a 5 year old sometimes. But he is ONLY 2. He’s newly a toddler. He’s learning boundaries. He’s a ball of emotions. He understands but doesn’t understand the way I’d like him to… yet. And I’m finding that I have to remind myself that. If for no other reason, to keep me sane.

In the midst of all of our toddler growing pains, he throws in little moments that can take my upset/bad mood to the opposite spectrum. This last weekend while out to dinner with my parents, he decided it was a good time to start singing. At the top of his lungs. It was closer to screaming lyrics than singing. I love my kid but voice of an angel, he does not have. I’m not holding out hope for Q being the next YouTube singing sensation. I normally would be mortified by this but in that moment, it was hilarious. By the way, I’m pretty sure we are “Never Ever Ever” going to move on from that song. My sister in law even tried to expand his musical interests by playing him the best of the 90’s to no success. Even yesterday when I was ready to start yelling “Free 2 Year Old!” from my deck, he said, “KISSES!” and wanted to shower mommy with them. He found this to be extremely funny. Thank Jesus he’s finally mastered the closed mouth kiss…. The drool made Q kisses un-fun.

On a side note: I’d like to thank Jared for being a much more patient and calm human than I am. It’s always good to have back-up. Trust me. Until next time…

One thought on “Sometimes I Forget My Kid’s Only 2….”