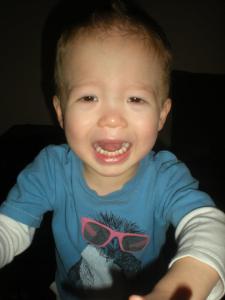 I couldn’t have taken a better picture of Q to sum up the title of this post. I didn’t plan to write another entry right away but I’ve decided to use this blog as free therapy.  Which I am in desperate need of…. We started to notice a shift in Q’s attitude about 2 months ago. Some call it the “Terrible 2’s” but I just call it “annoying”. He’s learned to be defiant. Example – he started to stand and jump on our couch. I could see this was going to lead to flailing head first onto the hardwood floors. So we started to implement “no, no”. When saying this, he looked right at us and pointed the tip of his foot as close to the edge of the couch as he could and looked me dead in the eyes as if to say, “Don’t tell me what to do woman!” If he is doing something he isn’t supposed to and we use “no, no” he just turns around and says it back. It’s ineffective.

He has also started to throw tantrums when he doesn’t get what he wants, when he wants it. This behavior could drive me to drink on a daily basis. The only thing that stops me is thinking about the massive hangovers/headaches I’d have at 6am when my kid wakes me up and doesn’t understand, “Shhhhh…. mommy doesn’t feel good.” Luckily, we’ve avoided these meltdowns in public.

The biggest hurdle for us has been sleep. Q has slept through the night since the 5-6 month mark and generally loved nap and bedtime. If he wasn’t tired, he’d just talk to himself until he fell asleep. I should have known it was too good to be true and eventually we’d deal with what we are now. For about a month and a half bedtime has become the worst time of day. There was a 2 week period where he was even waking up every hour on the hour. That turned into 1-2 times a night. The hardest part is him going through the “I only want mommy for everything” phase. I know, I know… doctors and even friends say “just let him cry it out.” We fully admit that he is “playing us like a fiddle” (in the words of my mother-in-law) and are the biggest suckers on the planet. But selfishly, we need sleep. So I’d rather go against the rule book and rock him for 15 minutes, go into his room and sit there until he falls asleep or the WORST solution, let him sleep in the extra bedroom with me when I’m at my wits end. Most will call this “weak” or “a bad habit”. I call it survival. Last night we decided to let him cry it out because, “He has to concede at the hour mark”. An hour and a half later, the kid didn’t give up. Try having a “Come to Jesus” with a 2 year old – It doesn’t work. I normally don’t ask for a lot of advice when it comes to parenting but I am MORE than willing to hear some when it comes to this….

Now before I go any further I’m going to point out the obvious – I’m a COMPLETE brat. I’m currently not working, am basically a stay at home wife, my kid goes to daycare 5 days a week and we are blessed to have grandparents that are MORE than willing to take him if we need an afternoon, day, night, weekend off. And I know that “this too shall pass”.

I frequently tell my own mother that I feel like a “bad mom”. I had an idea of what motherhood would be like and when it wasn’t the Hallmark movie I pictured in my head, it was a huge wake-up call. I grew up with a stay at home mom and was a mommy’s girl. I wanted to be just like her – have kids and stay at home. I wanted girls who liked Barbie’s, playing dress up, shopping and getting Mani and Pedi’s (Side-Note: This changed when I was in the bathroom of the Blue Moose and 3 girls were in prom dresses that barely covered their illegal body parts, talking about “making out with their dates”. In that moment I prayed for boys). Being a parent is tough. It isn’t all puppies and rainbows. It completely changes your life. And quite frankly, isn’t for everyone. But what I’ve learned is that you don’t HAVE to be June Cleaver to be a good mom. You need to find out what works for you, your kid(s) and your own family.

On that note, I’m off to the Happy Harry’s penny sale to meet one of my best-friends from high school. She just had daughter #4. God bless her.

So here we go… my first attempt at blogging. I’m not sure what I’m doing or if I should even be doing this. I tend to “vent” when I write things down so this will probably just cause arguments between me and the hubby (I’m apologizing in advance for things I may or may not say). If this ever lands in the hands of Andy Cohen, I’m available. I’m sure ND Housewives who drive 2008 Camry’s and live in twinhomes are JUST as interesting as your current casts.

On April 18th my “baby boy” turned 2. This of course made me look back at the day I gave birth which feels like yesterday. I can literally remember everything about that time. For those who know me, they know I never hid the fact that I didn’t even remotely enjoy being pregnant. In fact, when I hear women say things like “I LOVE being pregnant” or “Isn’t it wonderful being able to experience the miracle of life?” while holding their huge belly, three thing come to mind: 1, You’re lying and saying what you think you SHOULD say. 2, You’re lying. 3, You’re actually the small minority of women that are crazy enough to actually feel that way (Disclaimer: this is all my twisted opinion). I have no problem saying what most women don’t think they should: I didn’t like gaining weight and feeling like a water-filled, puffy, beluga whale (57 lbs. to be exact). I thought the kicking was cute the first 5 times and then it got old. I missed beer. I missed sushi – REAL sushi. Not a shrimp tempura roll. I missed a rare steak – I generally don’t like steak. I didn’t like going to the doctor and being poked by a needle every week. I could really go on and on.

Now because I’ve put this all on paper, I just jinxed myself for if and when I get pregnant again. Because for all of the reasons I didn’t like or enjoy the pregnancy experience, it was easy. I didn’t get morning sickness. In fact I never even threw up. I never got stretch marks. My “dark line” eventually went away. I never lost chunks of hair like some women do after they give birth. I never got “pregnancy nose” or acne. My kid never parked himself in my rib cage so I couldn’t sleep. I didn’t have any cravings or sick at the smell of things I normally loved to eat. And even after gaining twice what you should gain during pregnancy, I was back in a bikini in less than 2 months. But thinking about doing it all over again has literally brought me to say to Jared, “If we had the money I’d get a surrogate”, to which he rolls his eyes at me.

On April 17, 2011 I went into labor at around 10pm. They immediately admitted me into the hospital, stuck a needle in my butt 3 times (UN-fun) to stop contractions and sent me home in the morning on “bed rest”. I was 6 weeks too early at this point. For me, all I could think about is someone “forcing” me to stay off my feet and everything I needed to get done around the house. Like pack a bag for when I did have to deliver and, oh I don’t know… clean the floors in my kitchen. Which I did…. Immediately after packing a bag. At 10am I went back into labor and found myself in a hospital bed by 10:45 with  doctor telling me, “We’re having this baby today”. The next 3 1/2 hours were a blur. Mostly due to the morphine I received that kicked in almost at the exact same time as my saddle block. For you mom’s unfamiliar, a saddle block is given when you’re progressing too quickly and do not have time for an epidural. By the way, I was more scared of that then the delivery. The thought of having a needle stuck in my spine didn’t sit well with me. Turns out, the doc stuck me three times before he could find the right spot and I didn’t feel a thing. I was so drugged up Jared had to wake me up and tell me to push. Some might say, “Don’t you regret not being fully there to experience it?”. Um… no. Three pushes and my kiddo was out at 5 lbs. 3 oz. at 3:15 on April 18, 2011.

I’m almost glad I was so drugged up because I slept through the stressful first day of the NICU. I probably would have lost my marbles. But 30 days later, we took Quinn Charles Wells home with us. I have to say we had the most amazing NICU staff help us through that time. It was stressful going up to he hospital 2-3 times a day, scrubbing your hands for 10 minutes each time, dressing in robes and seeing all of the tubes coming out of your newborn. It’s funny how the beeping of the monitors going off scared us to death the first week and after awhile we barely noticed them.

When I watched Quinn last weekend at his birthday party, opening presents, pointing out all of the soccer ball decorations, playing with his cousins and talking in almost full sentences it made me wonder, “where have the last 2 years gone?” He’s changed so much and become… well, me. He’s strong-willed and stubborn. He’s a “mommy’s boy” right now (I apologized to my own mother yesterday because I was the same way). And he’s his dad. He loves basketball and makes me laugh with his expressions and words. And he’s his own individual person, even at 2. He’s a sponge and takes in everything right now. And in spite of how much I might have hated what it took to get him here, I’d do it all over again to have him.

So now that I’ve semi-relived his coming into the world, I have decided to blog from here on out about things I’ve learned as a mother, my frustrations and funny stories (to me they’re funny). I was also recently asked, “Is it hard to have a good marriage after kids? How do you keep it sexy?” – Best question I’ve been asked in a long time. Jared and I are weird. There. I said it and admit it. As I say this I’m staring at him mocking me while cleaning up the kitchen. But we have learned what works for US. What WE think is important. Some or even most people might not agree. But I’ll blog it anyway. So that’s it. Until next time… mom, thanks for probably being the only person to read this 🙂