Hello to another wonderful summer week…. I say that with as much sarcasm as possible. This could quite possibly be the worst summer weather I can remember in recent history. We did get a break in the rain and cold on Sunday to finally take Quinn’s 2 year pictures. Above is a quick preview. Be sure to check out Erika’s website! She does amazing work!

So this blog is basically going to be a “Week in the Life of Quinn” update. Some of you may have seen this picture: 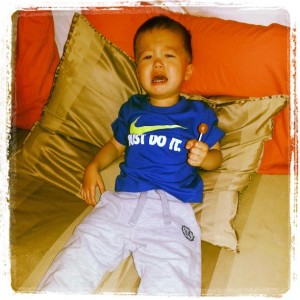 This is a good representation of our biggest struggle this week. The kid loves suckers. And I blame the place where he gets his haircuts since that’s the place that exposed him to what has now become the bane of my existence. The “problem” is that he always wants 2. Frankly he always wants two of everything. God forbid one hand be empty! The upside, he doesn’t eat them. It’s security. The ability to say to himself, “I have TWO suckers that mom and dad didn’t really want me to have but I won and got my way!” The sucker thing is sensitive because this is what caused my post traumatic stress disorder with dentists. I hate the smell when you walk into an office, I hate the chair, the lights and even though the dentists themselves are generally nice people, I loathe them for what their profession entails (i.e., filling cavities and pulling teeth). Hence why I never go. But when I was little my mother gave me suckers which caused many o cavities and led to many visits to the dentist. I’d like to avoid this at all costs for Quinn if possible. So I guess the fact that he just holds them and doesn’t eat them should be a blessing but it’s the principle. It’s like that saying, “You may have won the fight but I will win the war!”…. or something along those lines.

Another big event in our house was Q getting a big boy bed! The kid hates his crib and hasn’t slept in it for a good two months. So after sleeping apart for at least half the night for a couple of months, Jared and I decided enough was enough. When Quinn fell asleep the first night and Jared got into bed, he goes, “Oh hi. Who are you? I’m used to being in a different bed or a kid in here. It’s like sleeping with a random.” So clearly it was time. At least if Q has a bed and wakes up, we can go lay with him until he falls asleep (so tricky). We just finished night 2. Although he has woken up a few times throughout the nights, at least he’ll sleep in his room now. I’ve already chalked this up to a successful parenting decision.

An update on his swearing: He’s still doing it. And more excessively. He now says it multiple times in a row. He’s even shorted it to just “damn”. I’m now implementing distractions when he goes on a rant like singing the ABC’s. The only pr0blem is he goes back to saying it as soon as the song is over. And we haven’t kicked our “We Are Never Getting Back Together” obsession…. The only change is that he sings more w0rds to the song. #toddlerproblems (Jared is going to kill me. He hates “hashtags”…. he usually says “hashbrowns”.)

Today is also my dad’s birthday so tonight it’s dinner with the grandparents! On a serious note, I’d just like to say I have the best dad in the world! I’ve never known a more patient, kind, sometimes funny (you have to know him to understand this… mom and I have re-named his jokes and revelations as “Craigisms” because they can be mildly ridiculous at times) and most importantly, the best grandpa a little boy could ask for!

Things to look forward to in the coming week: Ribfest! We will not be attending with Quinn. Why? 1, because it’s God awful expensive and I refuse to pay those prices for a 2 year old. 2, You should see my kid with a rib. It’s like catnip for clones (you’re welcome Jared). Thursday grandma and grandpa are taking Quinn so Jared and I can have date night. This will mean home by 8 and a full night of sleep. Thank Jesus. Until next time….

One thought on “I Can’t Think of a Title For This Blog….”