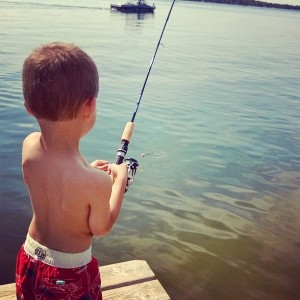 After neglecting my blog for a good 3 months, I suppose it’s time to finally post something. My last entry was all about Quinn turning 3…. 3 going on 13. We have had a lot going on since April. Our biggest event was selling our first house. We had a lot of memories there so it was actually bittersweet. We moved in a week before we got married in 2008. Add in 6 years of accumulated crap and a kid…. It was time. Quinn loves the space to play and Jersey will probably die of a heart-attack with all of the new sounds/noises due to construction on all sides of us. However, we couldn’t feel more blessed!

So much has changed with Quinn over these last few months. He went from “toddler” to “man child” in the blink of an eye. After our annual Vegas trip in April, we came back and he was probably more mature than we acted that weekend. He changes so much, even in a couple of days. Before our move bedtime was a nightmare. For some reason our child doesn’t require the normal amount of sleep the average 3 year old needs. Bedtime for Quinn was 10:30-11pm. Every. Single. Night. The kid wanted to be up later than we did. And he would wake up at least twice a night and be up and ready to go for the day by 7. I didn’t understand it. After living with my parents for 3 weeks I thought we would be screwed. It disrupted any schedule we had but then again, I doubted it could get any worse. Somehow since the move things have improved. Not completely but we’re getting to bed on average by 10pm now. And for the most part, he will go to bed on his own. Whenever I complain about this my mom and dad’s famous answers usually go something like this: “I remember it well Bethany…” or “It’s just a phase”. My personal favorite: “It’s not like he’ll want you to sleep with him at night when he’s 16” – Great. Thanks dad. I’ve just accepted the fact that I will more than likely average 5-6 hours of sleep a night at most until he’s… oh, I don’t know… 18. Wait. More like 25.

He’s too smart for his own good. We can’t even tell him little white lies anymore. We’re called out on almost everything we tell him. Forget saying things like, “If you’re good, next week we can do ________.” There was a time he would forget such promises that we may or may not have intended to keep. My mom always reminds me that I wanted a smart kid. By smart what I really meant was if he’s not going to be a professional athlete, I’d prefer he become a doctor… or the next Mark Zuckerberg. I don’t think that’s asking too much. I have to give the kid credit – he’s basically re-writing the English language. I always tell him to “Be patient” or “Hold your horses” so instead he’s condensed this down to “Be patient your horses!” when I ask him to do something. Jared also frequently has to tell him, “You can’t do ____ in public.” Recently on an outing to a baseball game with my dad he said, “Grandpa… is that the public?”, and pointed to the crowd. My 3 year old genius.

He’s a beast. He’s already over half my size. He’s generally as tall or taller than most 4 and even some 5 year olds. I’m hoping this growth spurt doesn’t plateau at 5’10. He’s sports obsessed – Doesn’t matter what it is. Basketball, football… currently his big thing is baseball. On the plus side, the kid has a killer arm already. To the point where the carnie at the Fargo Fair couldn’t believe my kid made 6 out of 7 throws at a game that was meant for kids much older than him. His downfall? He can’t catch to save his life. Jared cringes every time we watch him “attempt” to catch a ball. I won’t lie – it’s painful. Last week he said to me, “I’m really good at sports” and I said, “Uh… which ones? To which he replied, “All of them”. Immediately after this riveting conversation the ball dropped less than an inch in front of his glove. He looked at me and said, “Mom… throw it INTO my glove. Don’t you know anything?” We have a long way to go….

He has gigantic feet and no rhythm – both inherited from his father. Under no circumstances should shoe makers charge $75 for shoes. For a 3 year old. I get it… most kids are about 5 by the time they’re wearing the size he’s in right now. I told the nice lady at Scheels that it was a “crime”. I’m going go broke just buying him shoes. He also can’t dance. At all. When he was 1, his “dancing” was cute. Now it’s just awkward. It definitely doesn’t scream “Quinn Wells for Prom King 2027”.

After all the trials and tribulations of having a 3 year old, he’s so much fun now! We’ve never talked to him like a little kid. We’ve always talked to him like we talk to anyone else. And now, we can have actual conversations with him and he understands what we’re saying and vise versa. He’s extremely loving as of late – I think he gets this from my mother. We picked him up after they had him for the weekend and he was even telling our dog he loved her. Which isn’t even close to true. But either way he seems to know right when we need a hug or to hear, “You’re my best-friend!” – on the other hand, I feel like he knows if he says or does these things while in trouble, we immediately forgive him. Back to him being too smart for his own good. A blessing and a curse!

All mothers can completely relate to how quickly things change with your child. My biggest mother fail is not documenting his “milestones” as much as I should. Before I know it he’ll be driving!