Every time I open Facebook, I see my wonderful mom friends doing all of the fun and creative activities I have frequently “pinned” onto my Pinterest boards – “sushi” PBJ’s, different foods into ice cube trays for visual effect, blow drying crayons onto a canvas, homemade play dough… The list is endless! I’ll say it right now: I aspire to be you because I’m not even close. However, my kid could care less. His attention span lasts about 15 min tops. He has limited interests. I feel like generally, he’s a weird 2 year old.

I notice a lot of kids his age already have things they’re really interested in or into. Here is a picture of the toys we have in our house: 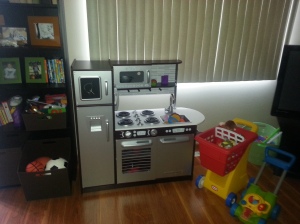 With the exception of a basketball hoop and water table for outside, this is it. And barely any of it gets played with. I see my friends’ kids who love certain cartoon characters, coloring, painting, etc. Quinn isn’t attached or into anything for more than a short span of time. But this was evident when he was a baby. Where most kids get attached to a pacifier and/or blanket, my kid liked a paci for exactly 1 month, and although he likes his “Me” (his blanket… not sure where that name came from), if we told him it was gone and never coming back, he’d get over it. This is a far cry from his parents because I had my blanket until it disintegrated and Jared loved his “Banka-Boo” so much he had to call and check on “her” when it was left at his grandmother’s house once. I was obsessed with Barbie’s and playing “house” and Jared loved GI Joe. I remember thinking TV was the greatest thing in the world. When we had Q, we imagined the things he’d be into at this age. And then… nothing.

When he was a year old, he started to like music. He responded to Eric Church’s “Springsteen” with a smile and a head-bob. He loved dancing (not very well… he can thank Jared for that) to 80’s and 90’s rap and I hate to admit it… “Mollie B’s Polka Party”. I 100% blame my parents for that phase. That lasted for a couple of months. He isn’t remotely interested in sitting down and watching a movie or cartoon. As much as he enjoys the Sponge Bob theme song, Mickey Mouse Hot Dog song and short doses of Modern Family, that’s where it ends. He likes parts of movies – The Joker’s monologue at Bruce Wayne’s party in “The Dark Knight”, the fight scene in “Step Brothers”, the opening of “Rock of Ages” – clearly all child friendly. The fish experiment of 2013 – EPIC fail. Not just because they both died within a month but because he forgot about them within the first 2 weeks. We tried painting (this is as Pinteresty as I get). He liked it until he got some on his hands. I do take full responsibility for him hating being dirty…. I’m obsessive compulsive when it comes to cleanliness. Play dough – unsure what to with it. He used to love books. That lasted about a month and a half. He does like basketball. He’ll sit and watch it for 20-25 minutes on a good day. And that’s also the only thing he consistently likes to play with. We might get an NBA player yet!

Long story short, although I aspire to be a Pinterest mom, I figured there’s no use going through the hassle until my kid can concentrate on something for longer than 30 minutes or appreciate the time it takes to figure out what the damn Elf of the Shelf is going to do everyday. Give the kid a Nook/cell phone/Surface and let him watch YouTube nursery rhyme videos, a bouquet of balloons or an empty box and he’s happy. One day when he begs to buy toys every time we go to Target or freaks out if the TV isn’t on the show he wants, I’m sure I’ll say, “Can we go back to the time when you didn’t care about anything?” The vicious cycle continues…

PS – Jared would like to thank the young lad at daycare who taught Q “We Are Never Ever Getting Back Together” – So far, this has held his interest the longest of anything. Ever.

One thought on “Hi, My Name is Beth and I’m Not Pinterest Mom”